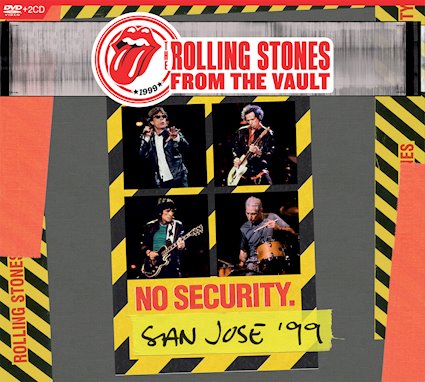 It is always impressive when a band films the final nights of a tour. There is no margin for error. If you get a mic squeak, flubbed note, lyric wrong, or anything else there and you can’t go back and film the next night. In 1999 the Rolling Stones finished their Bridges To Babylon tour in San Jose and From The Vault: No Security – San Jose 1999 is a great time capsule of those shows. It would be interesting to know if this was shot with the intention of it seeing it be released or not. There are times where the cameras are crooked and the camera men appear almost in the way which is unusual for concert films. Having said that, it is a nice addition to the Stones’ catalog. The performance is stripped down visually. The lighting is good for the era but there are no props that you come to expect from the Stones and there is a single video screen above the stage for the folks in the back to see better. For rock ‘n’ roll purists, this is exactly what you want…no distractions. Frankly that would have made a better title than No Security. Another thing that is really impressive is how many of the musicians are in the band to this day. The nine support musicians blend into the sounds seamlessly. Also you realize quickly that the four guys in the band don’t look any older in 2018 than they did in 1999. We all look older but they stayed the same. The set contains a special “B” stage in the arena where you really get the band stripped down for “Route 66”, “Get Off My Cloud”, “Midnight Rambler” and “Tumbling Dice”. You get a few songs in this set that you don’t get on every release like “Respectable, “You Got Me Rocking”, “Saint of Me” and a few others so it is a nice blend of the mega-hits with some lesser heard tracks. Keith’s “Before They Make Me Run” was especially good on this recording.