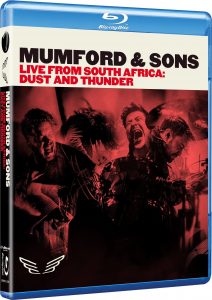 It is hard to ignore the global phenomenon that is Mumford & Sons.  Marcus Mumford and company,  with only three studio albums under their belt, play to a sea of ecstatic people every night.  New from Eagle Rock, Live From South Africa: Dust and Thunder chronicles the bands 2015 trip to to South Africa  to play for 85,000 plus people.  The bands plays a 17 song set which includes the bulk of their radio hits as well as performing with local musicians.  The band doesn’t rely on lights, video screens, or pyro.  In this era of music, this is about as stripped down as you will see a band.  What they do rely on is an overwhelming connection to the audience.  There is little doubt that Marcus could walk off mic and the audience could fill in ever word of ever song.  Ben (keyboards) and Winston (guitars/banjo) are caught many times on camera smiling as if uncontrollably.  There is nothing really “new” about their music but it is certainly done with a new energy.

Live From South Africa: Dust and Thunder is available now in three editions; a standalone concert film, a 3-disc including CD and documentary and a documentary only version on digital.