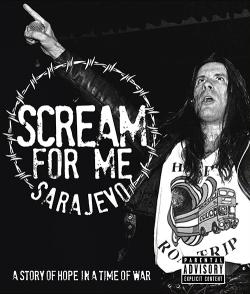 We have all be bummed when our favorite band announces a tour and skips our town. Imagine if the whole world skipped your town.  From 1992 to 1995, while we in the Western Hemisphere were worried about the invasion of Grunge, the young men and women of Sarajevo were in the midst of the longest siege in history.  The front-line of the war went right through their beautiful city and thousands of soldiers and civilians died.  In 1994, the then solo act, Bruce Dickenson was asked to play a show in the heart of the war-torn Sarajevo and by some miracle he accepted the invitation to play a free show.  Scream for Me Sarajevo, directed by Tarik Hodzic, is a gripping film about the series of hurdles that transpired to make this life changing show happen.

If you are thinking that this is long-lost film of the concert itself, let us set your expectations properly…it is not.  Having said this, this might be the most interesting film to date on any member of Iron Maiden.  This story unfolds through the eyes of the young men and women and their stories around the show, told through the stories of Bruce’s band, management, security and the “human air raid siren” himself, Bruce Dickinson.

A word to those that don’t like sub-titles in their movies, this isn’t for  you.  You might be wise to spend 10 minutes reading wikipedia if you are not up on the history of Bosnia, the Serbs or Sarajevo.  That context will serve you well.  If you put the effort into watching it, we promise you will not be disappointed.  This is an amazing film.