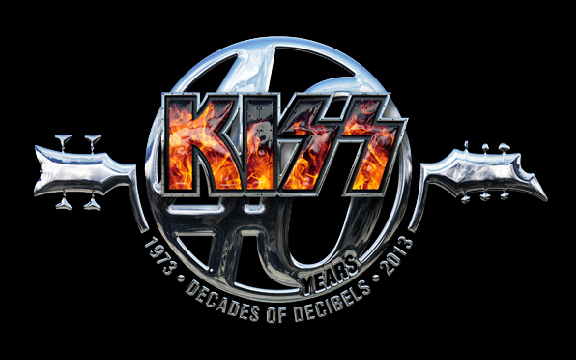 To say KISS is everywhere these days is an understatement.  They were recent inductees into the Rock and Roll Hall of Fame in Cleveland, OH, they are about to embark on a tour with Def Leppard (which comes to the First Niagara Pavilion on 8/24), Paul recently released his new book Face the Music and Paul even made time to stop by and talk with Iron City Rocks (listen below).  KISS also announced the release of two new offerings celebrating their 40 years, KISS 40 and Kissteria.   The idea of a KISS double CD greatest hits admittedly did little to excite this listener.  If you are a long time fan of the band, the bulk of this package you probably already have.  But at a reasonable street price ($16 +/-) you do get some choice tracks sprinkled in.  To the casual listener, the demo of “God of Thunder”, probably hits hard with Paul on vocals.  Tape traders for years have circulated Gene’s “Reputation” but it is nice to get a well mastered version finally.  From Killers we are treated to “Down On Your Knees”.   The set also includes “Jungle” from Carnival of Souls which unless you are a die-hard fan you have not heard in quite a while.  The set also includes previously unreleased live versions of “Cold Gin”, “Crazy, Crazy Nights” and most importantly to those of us in the “Iron City” of Pittsburgh, PA….”Deuce” from the 4th of July, 2004.  So as a whole if you look through the track listing you will see that the average person is probably getting a dozen or so songs they do not have on the previous “best-of” packages, this is a pretty nice offering.